Toxicity prevents us from safely deploying powerful pretrained language models for real-world applications. To reduce toxicity in language models, in this post, we will delve into three aspects of the problem: training dataset collection, toxic content detection and model detoxification.

Large pretrained language models are trained over a sizable collection of online data. They unavoidably acquire certain toxic behavior and biases from the Internet. Pretrained language models are very powerful and have shown great success in many NLP tasks. However, to safely deploy them for practical real-world applications demands a strong safety control over the model generation process.

Many challenges are associated with the effort to diminish various types of unsafe content:

In this post, we delve into the issue of toxicity in language models. As I’m still struggling to find a concrete definition of toxic content, I list a couple in the literature below.

[Kurita et al. 2019] Content that can offend or harm its recipients, including hate speech, racism, and offensive language.

[Pavlopoulos et al. 2020] We use the term ‘toxic’ as an umbrella term, but we note that the literature uses several terms for different kinds of toxic language or related phenomena: ‘offensive’, ‘abusive’, ‘hateful’, etc.

Overall, toxicity is a broad term to describe several types of unsafe content. Methodologies in this post can be applied given some form of definition of toxicity; e.g. presented in the instruction for annotators. How to properly define the concept of toxicity and thus collect accurate annotation labels is out of the scope of this post.

How to categorize toxic content is not a straightforward task. Which content should be considered toxic and what types of toxic content exist can be very subjective. Language that does not look offensive to one group might seem inappropriate to another.

One popular categorization of offensive language is proposed by Zampieri et al. (2019), a three-level hierarchical taxonomy considering both the type and the target of offense. The Offensive Language Identification Dataset (OLID) dataset is collected based on this taxonomy. 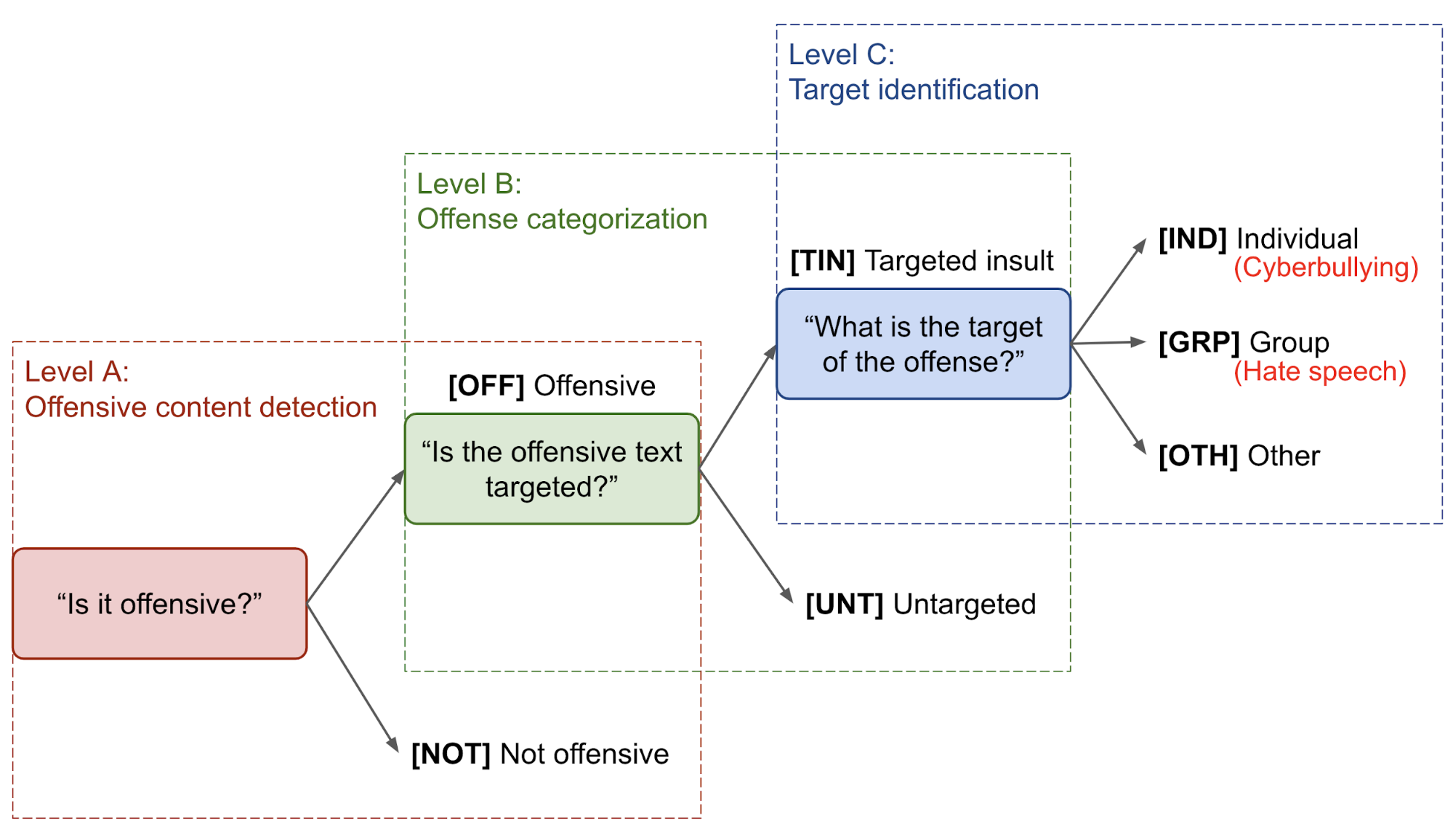 Preparing a dataset of samples labelled as “safe” vs “unsafe” is the foundation for training a toxic language classifier and further providing signals for model detoxification.

Vidgen & Derczynski (2020) summarized that training data annotations for toxicity detection on the high level can be collected by:

Crowdsourcing is the most common approach among them (Davidson et al. 2017, Zampieri et al. 2019) and there are several good practices to improve the data quality:

Khatri et al. (2018) proposed a simple approach to bootstrap a large amount of semi-supervised dataset for learning toxic content classifiers. Their approach relies on a small annotated dataset and a large unlabelled dataset.

Their experiments showed that the TS bootstrap classifier achieved pretty good numbers on F1 score, accuracy and recall and it could also transfer to out-of-domain test data.

Given a supervised dataset, we can train a text classifier from scratch or fine-tune a pretrained language model to perform the classification task. But what if training samples are not good or sufficient enough? What if we don’t have access to such a supervised dataset?

To create a toxicity detection model that is robust to adversarial attacks, Dinan et al. (2019) proposed an iterative “build it, break it, fix it” strategy to improve the dialogue system safety with humans in the loop. 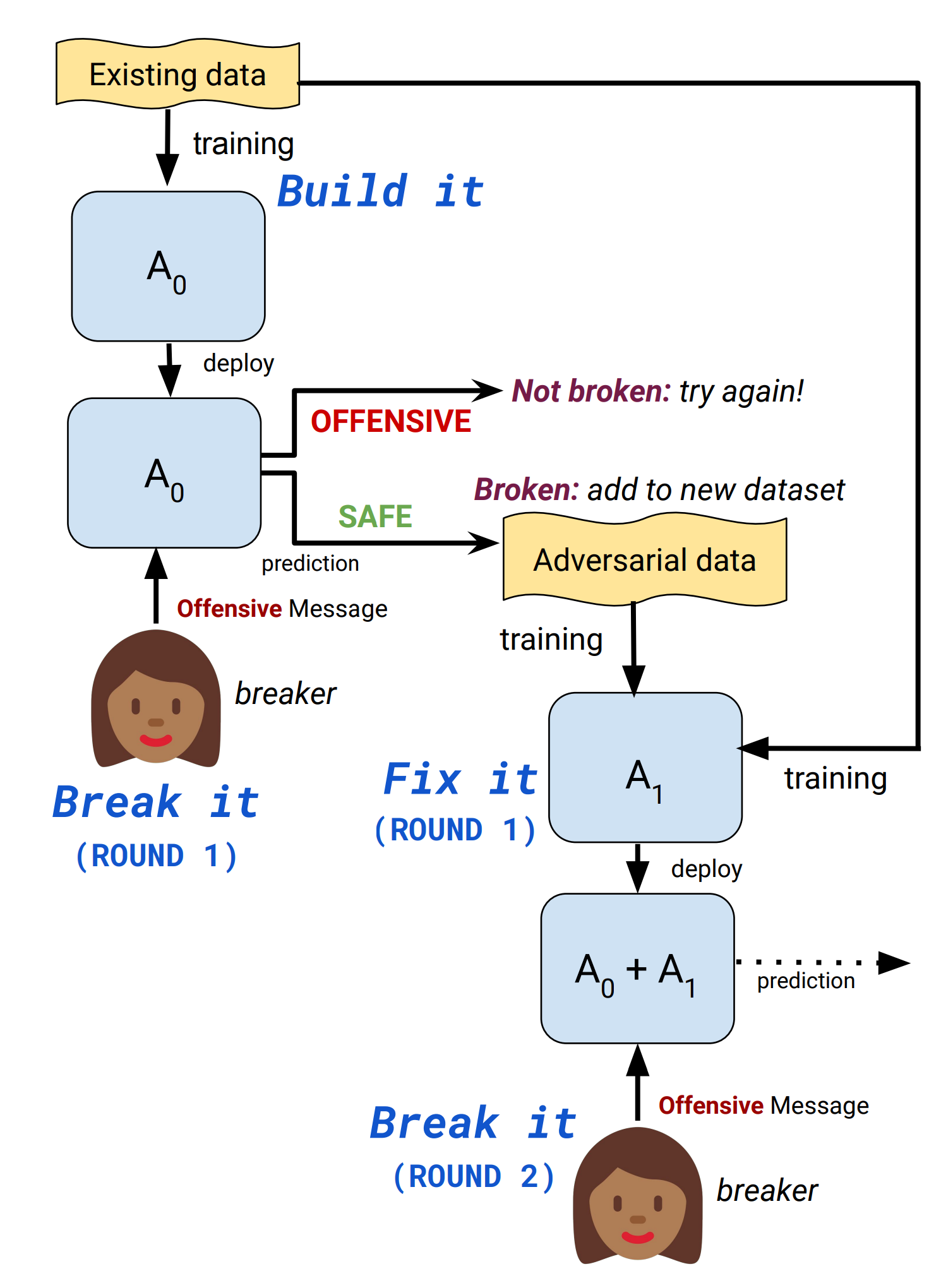 Fig. 3. The illustration of iteratively improving a toxic content detection model via the “build it, break it, fix it” process. (Image source: Dinan et al. 2019)

Fig. 4. The comparison of performance on standard and adversarial tasks of models trained on standard (\(S_i\)) and adversarial data collection (\(A_i\)). The subscript \(i\) indicates the number of training rounds. (Image source: Dinan et al. 2019)

Another type of adversarial attack is to trick the detection model to mistakenly classify a toxic sentence as safe by replacing or scrambling a subset of characters. Kurita et al. (2019) developed a method of generating such model-agnostic adversarial attacks, incorporating several types of character-level perturbations:

perspective API (www.perspectiveapi.com) is the most widely used commercial API for toxic content detection. Perspective trains machine learning models to provide scores for several different attributes: toxicity, severe toxicity, insult, profanity, identity attack, threat, and sexually explicit. Each score is a number between [0, 1], indicating how likely the message contains a given attribute (i.e. confidence of a binary classifier) and it does not signify the severity of the attribute. 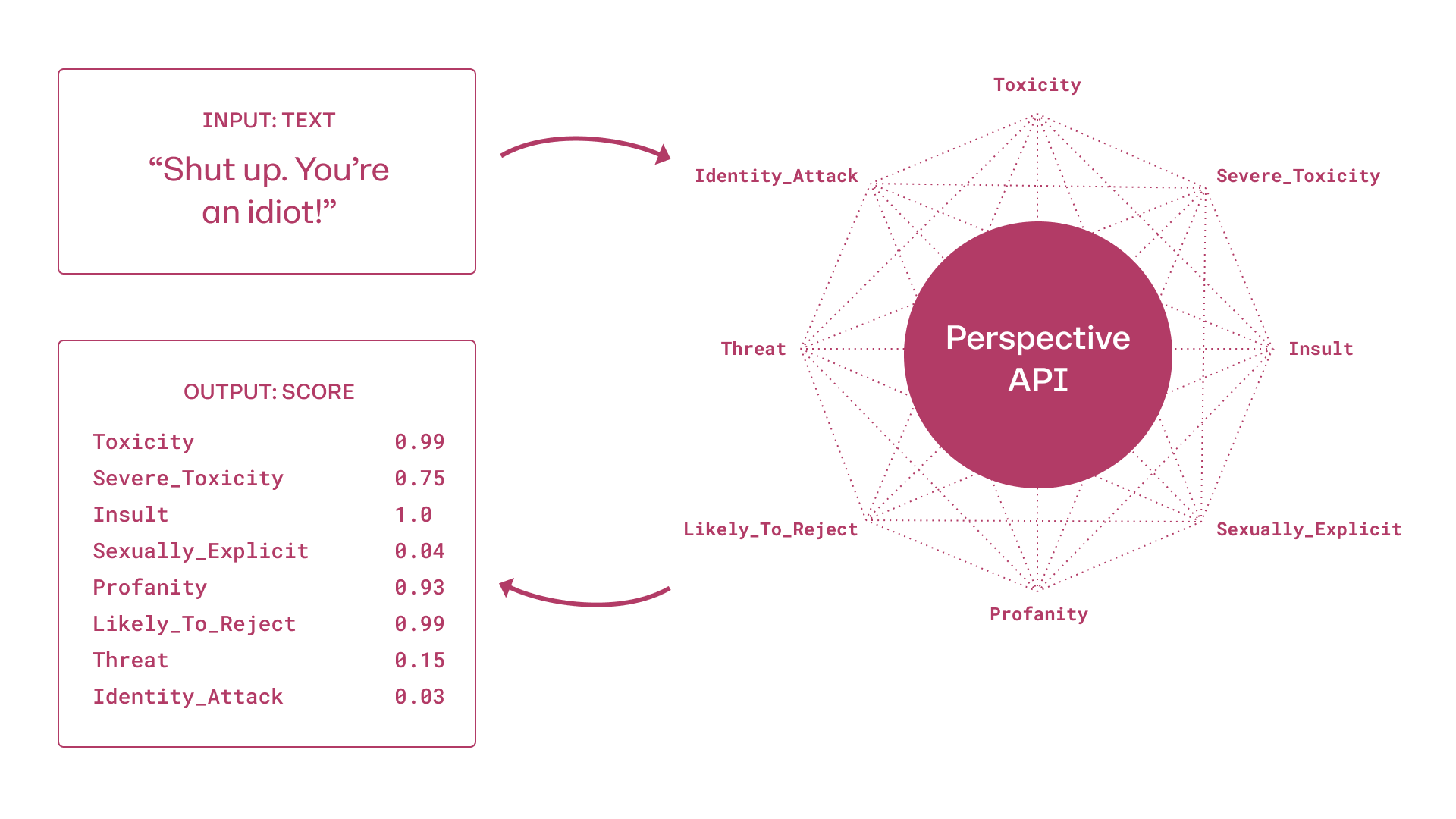 Gehman et al. (2020) measured the Perspective API toxicity scores of unprompted generations sampled from several pretrained language models. “Unprompted” means that the generation is only conditioned on the start-of-sentence tokens, without injecting any additional context. Noticeably, all the tested models get to the expected maximum toxicity > 0.5 after 100 generations. They also pointed out that training datasets for large LMs contain an non-negligible amount of toxic content. 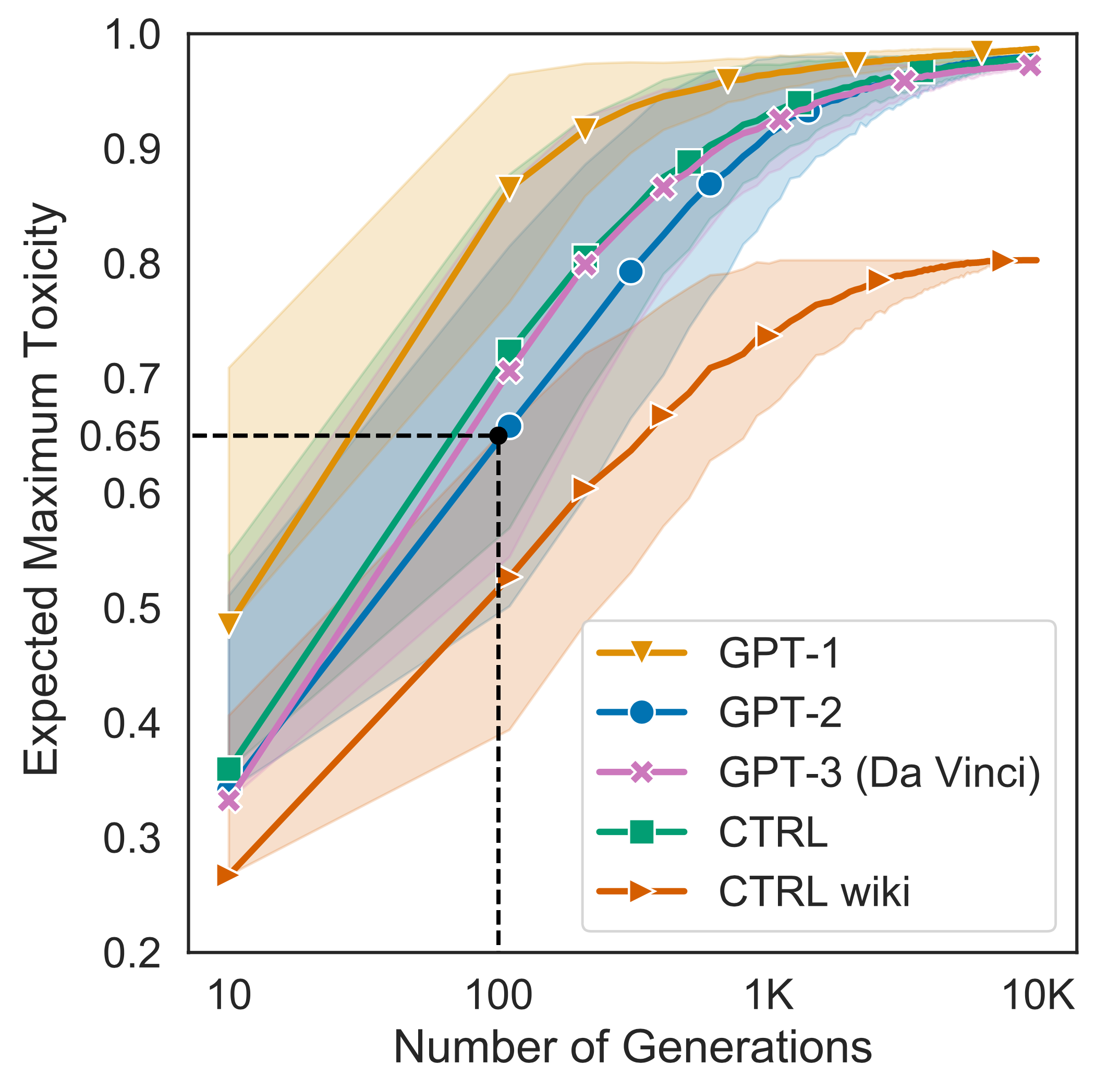 They collected the RealToxicityPrompt dataset for studying toxicity in conditional language model generation. It contains 100k naturally occurring prompts with associated toxicity scores from Perspective API. Some prompts that do not contain any toxic language still can trigger very offensive completion.

Despite of its popularity, Perspective API contains known biases, as summarized by Gehman et al. (2020):

… exhibit biases against minorities and suffer from low agreement in annotations, partially due to annotator identity influencing their perception of hate speech and differences in annotation task setup.

Notably, recent work has found that systems are overestimating the prevalence of toxicity in text that contains a minority identity mention (e.g., “I’m a gay man”) or text by racial minorities (e.g., text in African American English). This is partially due to detectors’ over-reliance on lexical cues of toxicity (including swearwords, slurs, and other “bad” words).

Self-diagnosis (Schick, et al. 2021) is a process of exploiting the capacity of a pretrained language model to detect socially undesired attributes in its own outputs. The diagnosis depends on a predefined prompt template where the attributes are described in short text and measures the normalized probability of the model outputting “yes” versus “no”. Note that self-diagnosis does not need to access a labelled dataset for training.

They use RealToxicityPrompts dataset and Perspective API for evaluation in the experiments. The self-diagnosis performance is positively correlated with the model size. 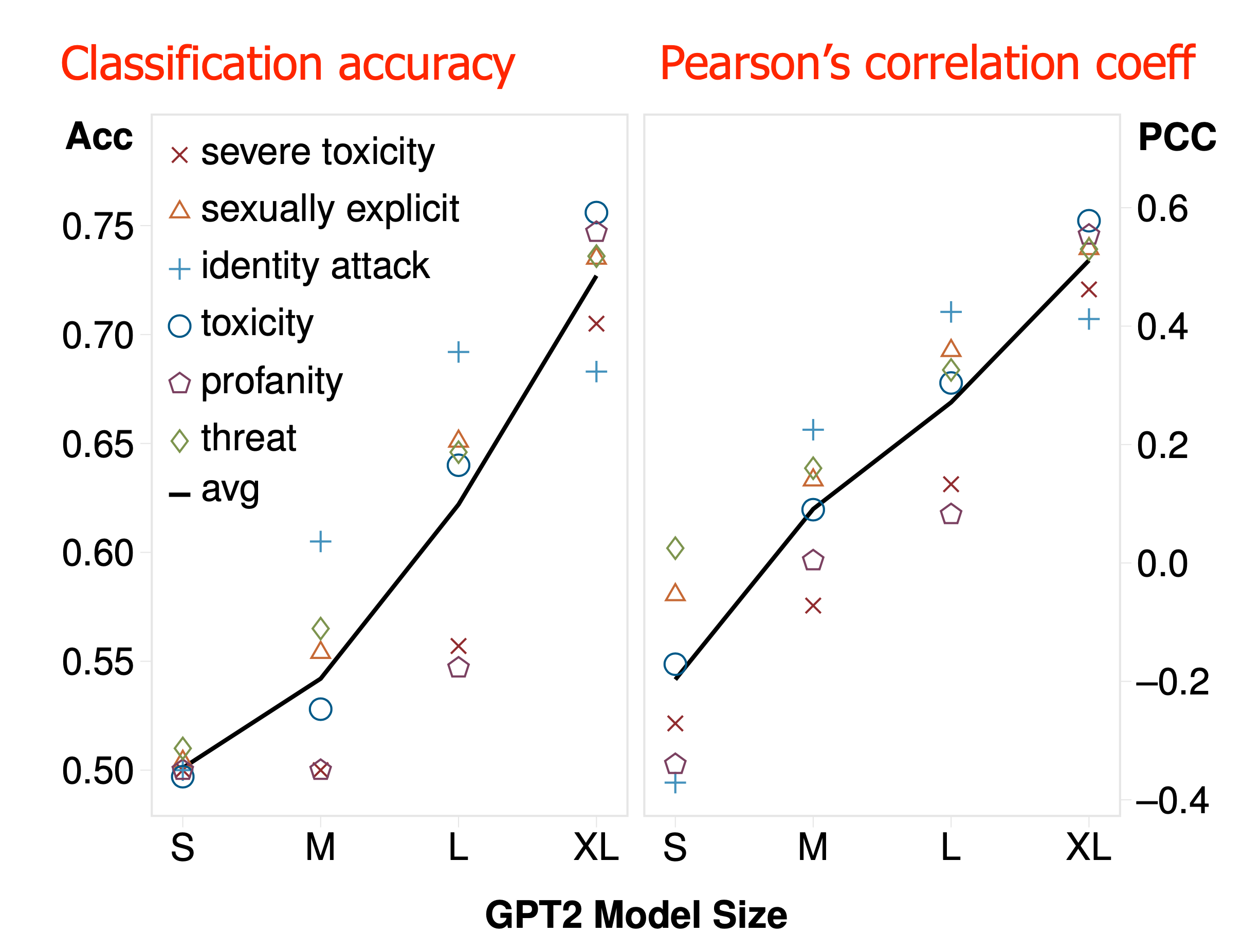 Bad word filtering is a pretty intuitive and effective way to avoid explicit profane words in the language model generation. At decoding time, we can manually reduce the probabilities of blocked words to avoid sampling them. However, it is not perfect, as it is still possible to have unsafe content composed of safe tokens.

Vocabulary shifting (Gehman et al. 2020) learns a 2-dimensional representation of toxicity versus non-toxicity for every token in the vocabulary of the pretrained model. Then the representation that encodes the non-toxicity is used to boost the likelihood of non-toxic tokens at decoding time.

Self-debiasing (Schick et al. 2021) follows the similar idea as in self-diagnosis. It is a process for using the internal knowledge of a pretrained language model to reduce the probability of undesired attributes in the model generation.

Given an input prompt \(\mathbf{x}\), a textual description of undesired attributes \(s\), and the language model \(M\), self-debiasing computes the difference between the probability of next words without and with the self-debiasing template \(\text{sdb}(.)\):

Because \(\text{sdb}(.)\) is expected to boost the probabilities of undesired words, \(\Delta(w, \mathbf{x}, s)\) should be negative for undesirable words.

In self-diasing decoding, a scaling function of the probability difference \(\alpha(\Delta(w, \mathbf{x}, s)): \mathbb{R}\to[0,1]\) is used to alter the true sampling distribution,

In the paper, they used a soft variant where the probabilities of the words with negative \(\Delta\) are reduced w.r.t. the magnitude of \(\Delta(w, \mathbf{x}, s)\):

There are a couple of major limitations in self-debiasing detoxification:

Unsupervised style transfer can be used to translate offensive sentences into innocuous ones (Santos et al. 2018). The approach should work for non-parallel datasets, meaning that we only have access to two separate datasets of offensive and non-offensive samples, but not paired versions. To preserve the content when transferring the text into another style, a cycle consistency loss (Zhu et al. 2017) is adopted. 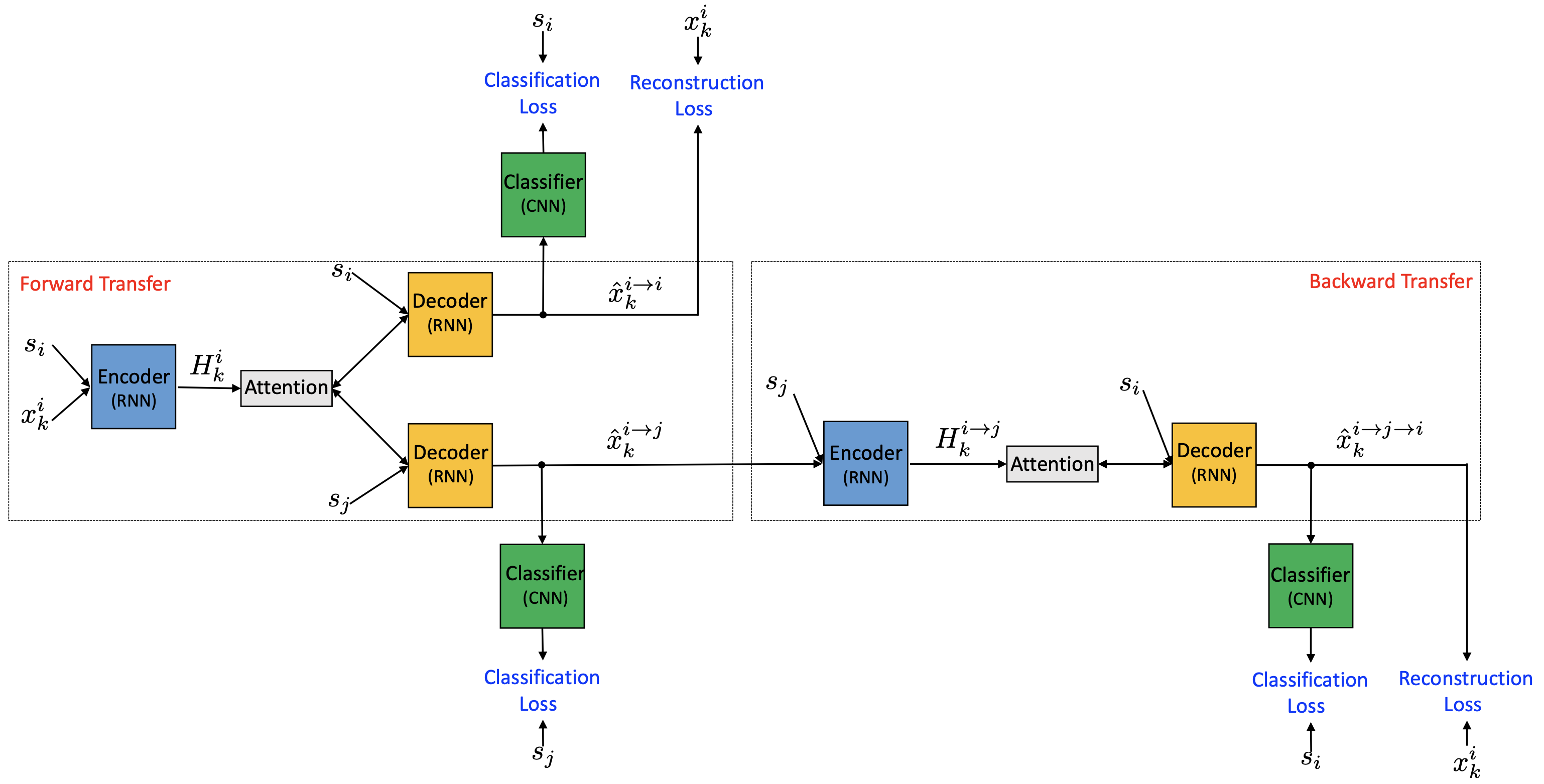 Following the illustration in Fig. 9:

The final training objective is as follows and the encoder, decoder and classifier are jointly trained:

Fig. 10. The comparison of style transformer and previous models that depend on disentangled latent representation. (Image source: Dai et al. 2019)

Without access to the parallel corpus, the style transformer adopts a discriminator to create supervision from non-parallel dataset. 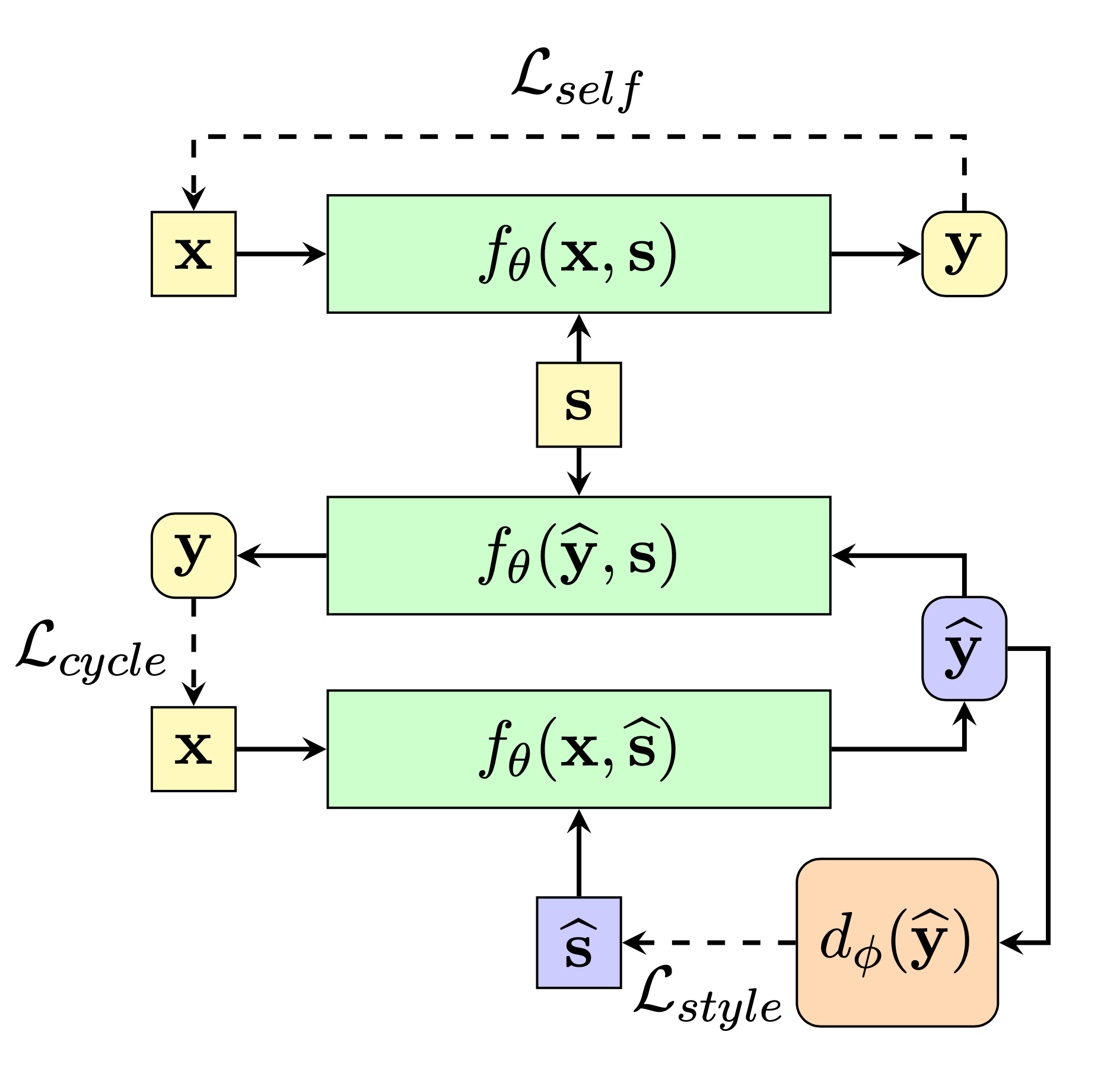 Driven by the research question “Can we fine-tune a pre-trained language model to suggest civil rephrasings of rude comments using a dataset solely annotated in toxicity?”, Laugier et al. (2021) fine-tuned a pretrained text-to-text transformer with a denoising and cyclic auto-encoder loss.

The encoder-decoder model is trained with the loss:

They used the above loss to fine-tune a T5 model, resulting in a model named CAE-T5. The conditioning is implemented like CTRL via control code (“civil” or “toxic”) prepended to the start of a sequence.

We can try to avoid toxic outputs via controllable text generation. There are several popular approaches for steering a pretrained language model toward desired styles, topics or safety criteria: 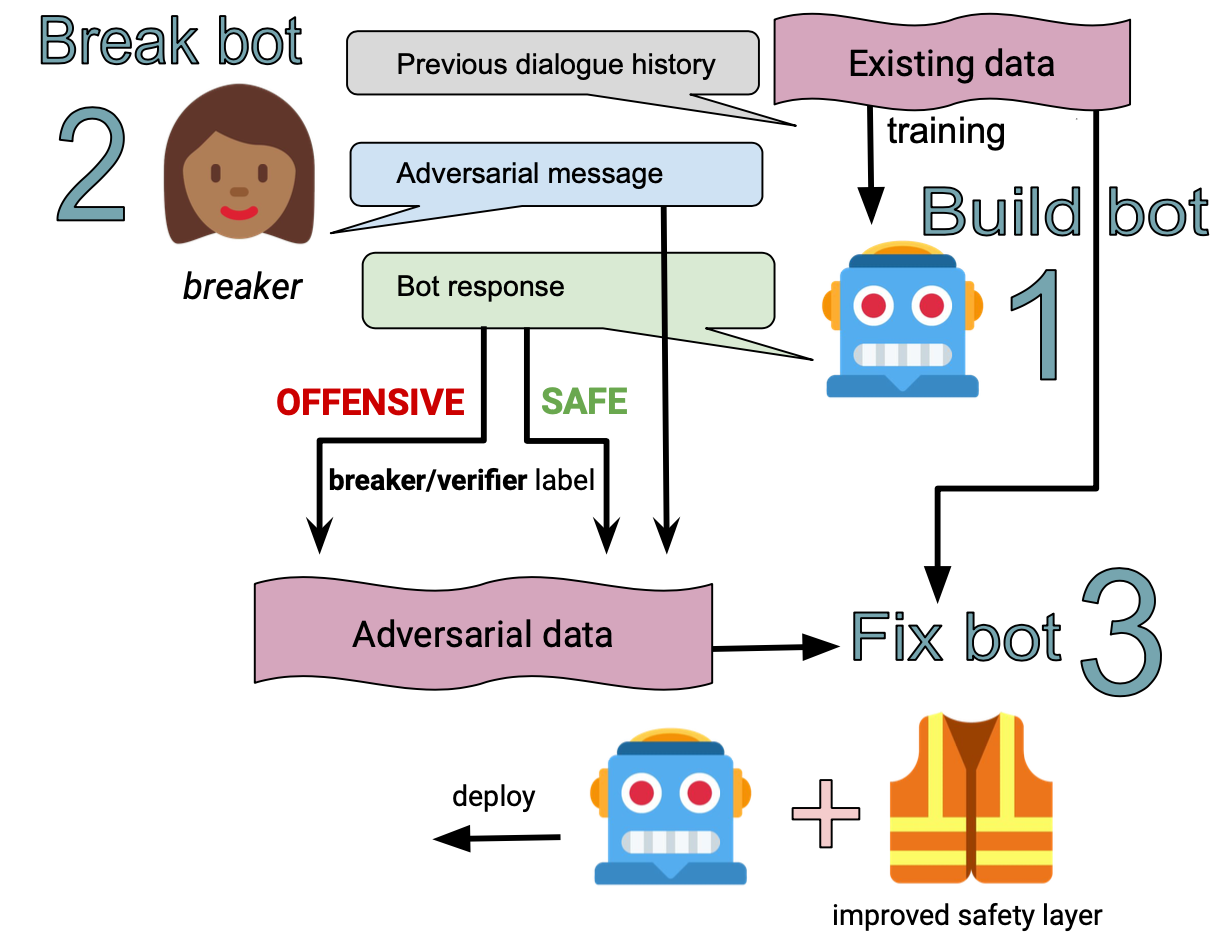 They consider four general strategies in the recipes for making the bot safer:

(*Only datasets in English are listed here.)

Hate Speech and Offensive Language Dataset (2017): contains about 25k tweets, each labelled manually as one of three categories: hate speech, offensive but not hate speech, or neither offensive nor hate speech. [Download]

Jigsaw Unintended Bias in Toxicity Classification Dataset (2019): contains about 2 Millions comments from the Civil Comments platform, which shut down in 2017. This data is annotated for toxicity, toxicity sub-types, and mentions of identities, which enables evaluation of unintended bias with respect to identity mentions. [Download]