If a model or policy is mainly trained in a simulator but expected to work on a real robot, it would surely face the sim2real gap. Domain Randomization (DR) is a simple but powerful idea of closing this gap by randomizing properties of the training environment.

In Robotics, one of the hardest problems is how to make your model transfer to the real world. Due to the sample inefficiency of deep RL algorithms and the cost of data collection on real robots, we often need to train models in a simulator which theoretically provides an infinite amount of data. However, the reality gap between the simulator and the physical world often leads to failure when working with physical robots. The gap is triggered by an inconsistency between physical parameters (i.e. friction, kp, damping, mass, density) and, more fatally, the incorrect physical modeling (i.e. collision between soft surfaces).

To close the sim2real gap, we need to improve the simulator and make it closer to reality. A couple of approaches:

Both DA and DR are unsupervised. Compared to DA which requires a decent amount of real data samples to capture the distribution, DR may need only a little or no real data. DR is the focus of this post.

What is Domain Randomization?

During policy training, episodes are collected from source domain with randomization applied. Thus the policy is exposed to a variety of environments and learns to generalize. The policy parameter \(\theta\) is trained to maximize the expected reward \(R(.)\) average across a distribution of configurations:

where \(\tau_\xi\) is a trajectory collected in source domain randomized with \(\xi\). In a way, “discrepancies between the source and target domains are modeled as variability in the source domain.” (quote from Peng et al. 2018).

The randomization parameters can control appearances of the scene, including but not limited to the followings (see Fig. 2). A model trained on simulated and randomized images is able to transfer to real non-randomized images. 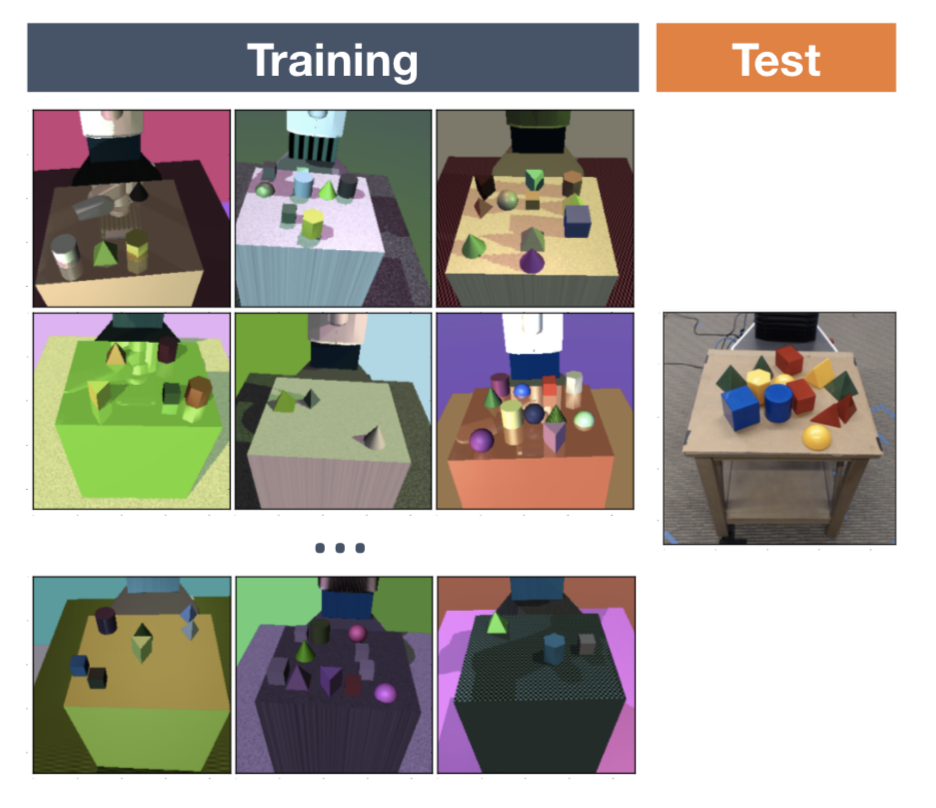 With visual and dynamics DR, at OpenAI Robotics, we were able to learn a policy that works on real dexterous robot hand (OpenAI, 2018). Our manipulation task is to teach the robot hand to rotate an object continously to achieve 50 successive random target orientations. The sim2real gap in this task is very large, due to (a) a high number of simultaneous contacts between the robot and the object and (b) imperfect simulation of object collision and other motions. At first, the policy could barely survive for more than 5 seconds without dropping the object. But with the help of DR, the policy evolved to work surprisingly well in reality eventually.

Why does Domain Randomization Work?

Now you may ask, why does domain randomization work so well? The idea sounds really simple. Here are two non-exclusive explanations I found most convincing.

One idea (Vuong, et al, 2019) is to view learning randomization parameters in DR as a bilevel optimization. Assuming we have access to the real environment \(e_\text{real}\) and the randomization config is sampled from a distribution parameterized by \(\phi\), \(\xi \sim P_\phi(\xi)\), we would like to learn a distribution on which a policy \(\pi_\theta\) is trained on can achieve maximal performance in \(e_\text{real}\):

Although randomization ranges are hand-picked in uniform DR, it often involves domain knowledge and a couple rounds of trial-and-error adjustment based on the transfer performance. Essentially this is a manual optimization process on tuning \(\phi\) for the optimal \(\mathcal{L}(\pi_{\theta^*(\phi)}; e_\text{real})\).

Guided domain randomization in the next section is largely inspired by this view, aiming to do bilevel optimization and learn the best parameter distribution automatically.

In our learning dexterity project (OpenAI, 2018), we trained an LSTM policy to generalize across different environmental dynamics. We observed that once a robot achieved the first rotation, the time it needed for the following successes was much shorter. Also, a FF policy without memory was found not able to transfer to a physical robot. Both are evidence of the policy dynamically learning and adapting to a new environment.

In some ways, domain randomization composes a collection of different tasks. Memory in the recurrent network empowers the policy to achieve meta-learning across tasks and further work on a real-world setting.

The vanilla DR assumes no access to the real data, and thus the randomization config is sampled as broadly and uniformly as possible in sim, hoping that the real environment could be covered under this broad distribution. It is reasonable to think of a more sophisticated strategy — replacing uniform sampling with guidance from task performance, real data, or simulator.

One motivation for guided DR is to save computation resources by avoiding training models in unrealistic environments. Another is to avoid infeasible solutions that might arise from overly wide randomization distributions and thus might hinder successful policy learning.

Say we train a family of policies with different randomization parameters \(\xi \sim P_\phi(\xi)\), where \(P_\xi\) is the distribution for \(\xi\) parameterized by \(\phi\). Later we decide to try every one of them on the downstream task in the target domain (i.e. control a robot in reality or evaluate on a validation set) to collect feedback. This feedback tells us how good a configuration \(\xi\) is and provides signals for optimizing \(\phi\).

Inspired by NAS, AutoAugment (Cubuk, et al. 2018) frames the problem of learning best data augmentation operations (i.e. shearing, rotation, invert, etc.) for image classification as an RL problem. Note that AutoAugment is not proposed for sim2real transfer, but falls in the bucket of DR guided by task performance. Individual augmentation configuration is tested on the evaluation set and the performance improvement is used as a reward to train a PPO policy. This policy outputs different augmentation strategies for different datasets; for example, for CIFAR-10 AutoAugment mostly picks color-based transformations, while ImageNet prefers geometric based.

Ruiz (2019) considered the task feedback as reward in RL problem and proposed a RL-based method, named “learning to simulate”, for adjusting \(\xi\). A policy is trained to predict \(\xi\) using performance metrics on the validation data of the main task as rewards, which is modeled as a multivariate Gaussian. Overall the idea is similar to AutoAugment, applying NAS on data generation. According to their experiments, even if the main task model is not converged, it still can provide a reasonable signal to the data generation policy.

Evolutionary algorithm is another way to go, where the feedback is treated as fitness for guiding evolution (Yu et al, 2019). In this study, they used CMA-ES (covariance matrix adaptation evolution strategy) while fitness is the performance of a \(\xi\)-conditional policy in target environment. In the appendix, they compared CMA-ES with other ways of modeling the dynamics of \(\xi\), including Bayesian optimization or a neural network. The main claim was those methods are not as stable or sample efficient as CMA-ES. Interestly, when modeling \(P(\xi)\) as a neural network, LSTM is found to notably outperform FF.

Some believe that sim2real gap is a combination of appearance gap and content gap; i.e. most GAN-inspired DA models focus on appearance gap. Meta-Sim (Kar, et al. 2019) aims to close the content gap by generating task-specific synthetic datasets. Meta-Sim uses self-driving car training as an example and thus the scene could be very complicated. In this case, the synthetic scenes are parameterized by a hierarchy of objects with properties (i.e., location, color) as well as relationships between objects. The hierarchy is specified by a probabilistic scene grammar akin to structure domain randomization (SDR; Prakash et al., 2018) and it is assumed to be known beforehand. A model \(G\) is trained to augment the distribution of scene properties \(s\) by following:

Unfortunately, this family of methods are not suitable for sim2real case. Either an RL policy or an EA model requires a large number of real samples. And it is really expensive to include real-time feedback collection on a physical robot into the training loop. Whether you want to trade less computation resource for real data collection would depend on your task.

The SimOpt model (Chebotar et al, 2019) is trained under an initial randomization distribution \(P_\phi(\xi)\) first, getting a policy \(\pi_{\theta, P_\phi}\). Then this policy is deployed on both simulator and physical robot to collect trajectories \(\tau_\xi\) and \(\tau_\text{real}\) respectively. The optimization objective is to minimize the discrepancy between sim and real trajectories:

where \(D(.)\) is a trajectory-based discrepancy measure. Like the “Learning to simulate” paper, SimOpt also has to solve the tricky problem of how to propagate gradient through non-differentiable simulator. It used a method called relative entropy policy search, see paper for more details.

RCAN (James et al., 2019), short for “Randomized-to-Canonical Adaptation Networks”, is a nice combination of DA and DR for end-to-end RL tasks. An image-conditional GAN (cGAN) is trained in sim to translate a domain-randomized image into a non-randomized version (aka “canonical version”). Later the same model is used to translate real images into corresponding simulated version so that the agent would consume consistent observation as what it has encountered in training. Still, the underlying assumption is that the distribution of domain-randomized sim images is broad enough to cover real-world samples. 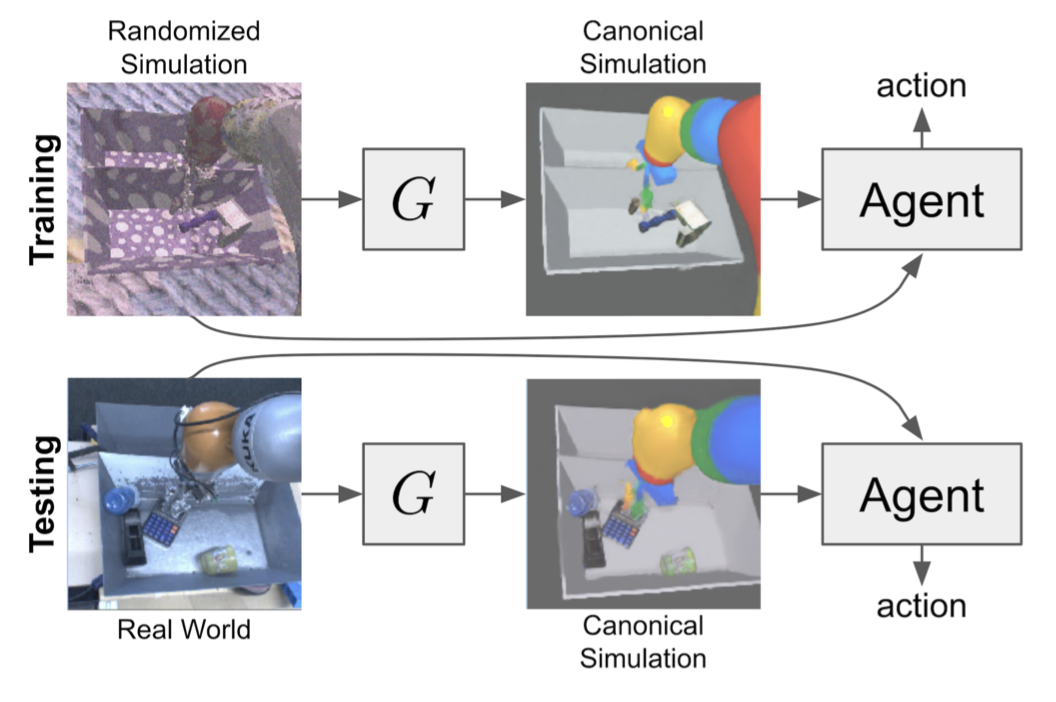 Fig. 5. RCAN is an image-conditional generator that can convert a domain-randomized or real image into its corresponding non-randomized simulator version. (Image source: James et al., 2019)

The RL model is trained end-to-end in a simulator to do vision-based robot arm grasping. Randomization is applied at each timestep, including the position of tray divider, objects to grasp, random textures, as well as the position, direction, and color of the lighting. The canonical version is the default simulator look. RCAN is trying to learn a generator

where segmentation masks and depth images are used as auxiliary tasks. RCAN had a better zero-shot transfer compared to uniform DR, although both were shown to be worse than the model trained on only real images. Conceptually, RCAN operates in a reverse direction of GraspGAN which translates synthetic images into real ones by domain adaptation.

Guided by Data in Simulator

Randomization is applied through a set of deception modules with encoder-decoder architecture. The deception modules are specifically designed to transform images; such as change backgrounds, add distortion, change lightings, etc. The other recognition network handles the main task by running classification on transformed images.

The feedback for training deception modules is provided by the downstream classifier. But rather than trying to maximize the task performance like the section above, the randomization modules aim to create harder cases. One big disadvantage is you need to manually design different deception modules for different datasets or tasks, making it not easily scalable. Given the fact that it is zero-shot, the results are still worse than SOTA DA methods on MNIST and LineMOD.

Similarly, Active domain randomization (ADR; Mehta et al., 2019) also relies on sim data to create harder training samples. ADR searches for the most informative environment variations within the given randomization ranges, where the informativeness is measured as the discrepancies of policy rollouts in randomized and reference (original, non-randomized) environment instances. Sounds a bit like SimOpt? Well, noted that SimOpt measures the discrepancy between sim and real rollouts, while ADR measures between randomized and non-randomized sim, avoiding the expensive real data collection part. 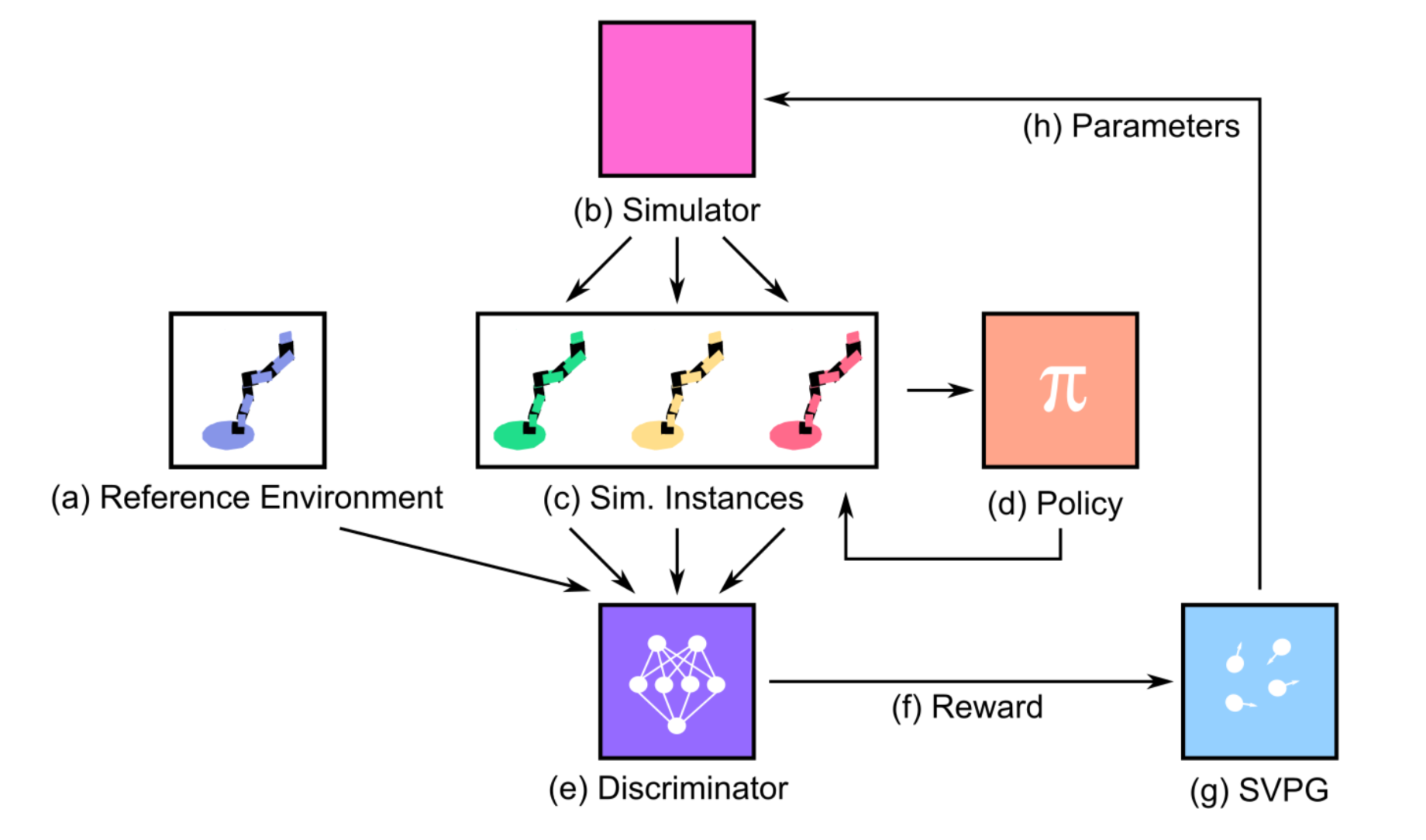 Precisely the training happens as follows:

The idea of ADR is very appealing with two small concerns. The similarity between trajectories might not be a good way to measure the env difficulty when running a stochastic policy. The sim2real results look unfortunately not as exciting, but the paper pointed out the win being ADR explores a smaller range of randomization parameters.