In Part 3, we would examine four object detection models: R-CNN, Fast R-CNN, Faster R-CNN, and Mask R-CNN. These models are highly related and the new versions show great speed improvement compared to the older ones.

In the series of “Object Detection for Dummies”, we started with basic concepts in image processing, such as gradient vectors and HOG, in Part 1. Then we introduced classic convolutional neural network architecture designs for classification and pioneer models for object recognition, Overfeat and DPM, in Part 2. In the third post of this series, we are about to review a set of models in the R-CNN (“Region-based CNN”) family.

R-CNN (Girshick et al., 2014) is short for “Region-based Convolutional Neural Networks”. The main idea is composed of two steps. First, using selective search, it identifies a manageable number of bounding-box object region candidates (“region of interest” or “RoI”). And then it extracts CNN features from each region independently for classification.

How R-CNN works can be summarized as follows: 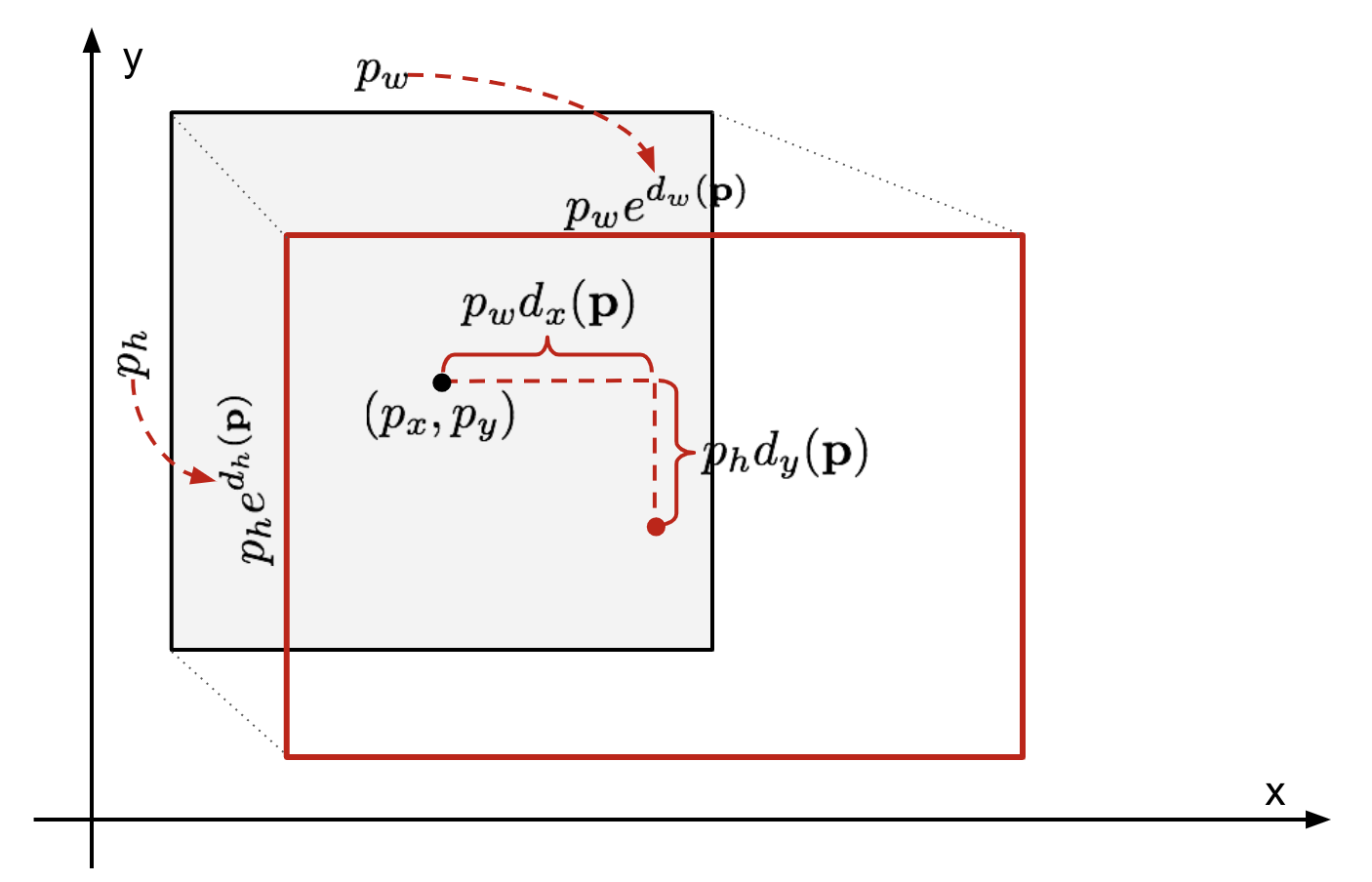 A standard regression model can solve the problem by minimizing the SSE loss with regularization:

The regularization term is critical here and RCNN paper picked the best λ by cross validation. It is also noteworthy that not all the predicted bounding boxes have corresponding ground truth boxes. For example, if there is no overlap, it does not make sense to run bbox regression. Here, only a predicted box with a nearby ground truth box with at least 0.6 IoU is kept for training the bbox regression model.

Several tricks are commonly used in RCNN and other detection models.

Fig. 3. Multiple bounding boxes detect the car in the image. After non-maximum suppression, only the best remains and the rest are ignored as they have large overlaps with the selected one. (Image source: DPM paper)

We consider bounding boxes without objects as negative examples. Not all the negative examples are equally hard to be identified. For example, if it holds pure empty background, it is likely an “easy negative”; but if the box contains weird noisy texture or partial object, it could be hard to be recognized and these are “hard negative”.

The hard negative examples are easily misclassified. We can explicitly find those false positive samples during the training loops and include them in the training data so as to improve the classifier.

Looking through the R-CNN learning steps, you could easily find out that training an R-CNN model is expensive and slow, as the following steps involve a lot of work:

To make R-CNN faster, Girshick (2015) improved the training procedure by unifying three independent models into one jointly trained framework and increasing shared computation results, named Fast R-CNN. Instead of extracting CNN feature vectors independently for each region proposal, this model aggregates them into one CNN forward pass over the entire image and the region proposals share this feature matrix. Then the same feature matrix is branched out to be used for learning the object classifier and the bounding-box regressor. In conclusion, computation sharing speeds up R-CNN.

It is a type of max pooling to convert features in the projected region of the image of any size, h x w, into a small fixed window, H x W. The input region is divided into H x W grids, approximately every subwindow of size h/H x w/W. Then apply max-pooling in each grid. 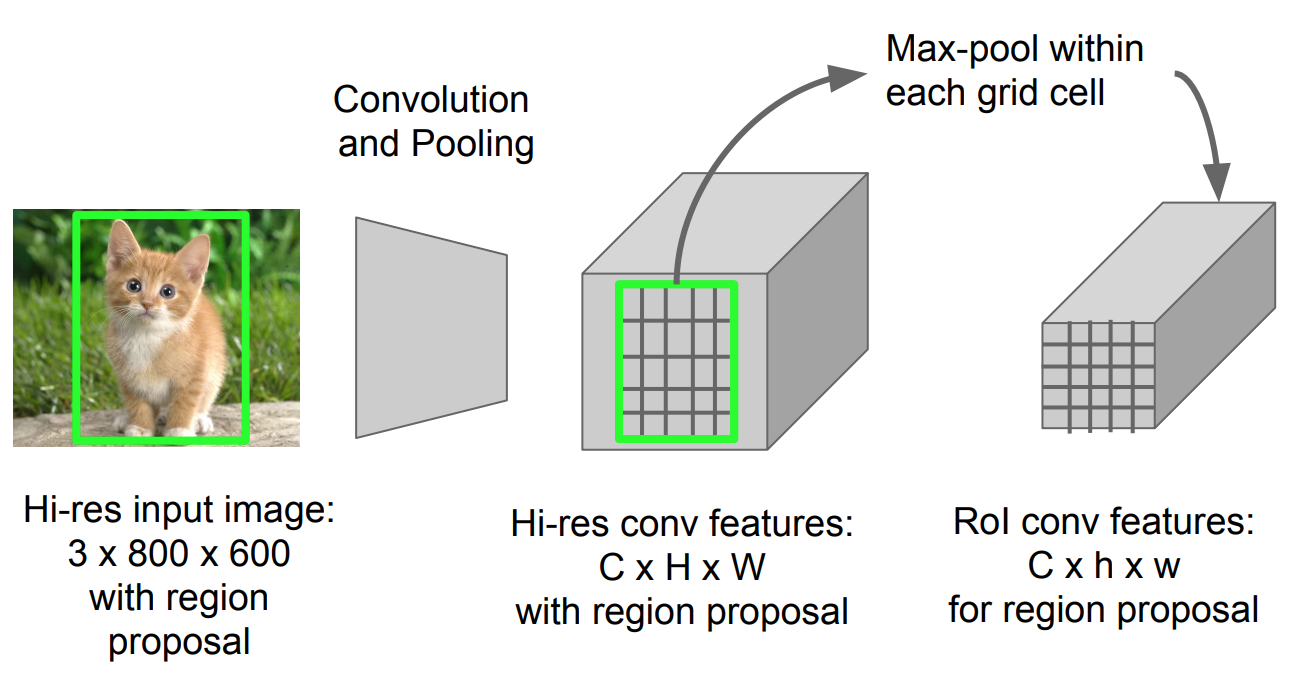 How Fast R-CNN works is summarized as follows; many steps are same as in R-CNN:

The model is optimized for a loss combining two tasks (classification + localization):

The overall loss function is:

The bounding box loss \(\mathcal{L}_{box}\) should measure the difference between \(t^u_i\) and \(v_i\) using a robust loss function. The smooth L1 loss is adopted here and it is claimed to be less sensitive to outliers. 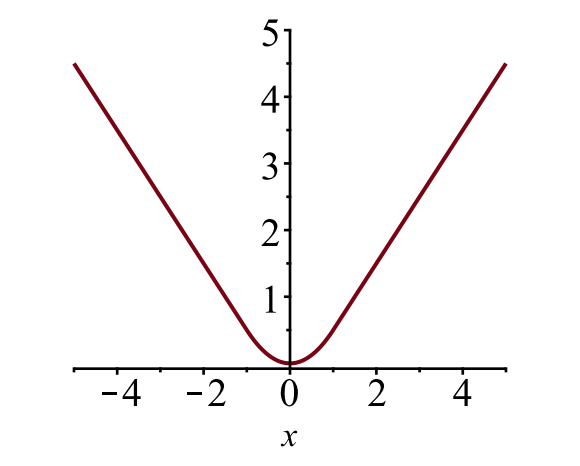 Fast R-CNN is much faster in both training and testing time. However, the improvement is not dramatic because the region proposals are generated separately by another model and that is very expensive.

Faster R-CNN is optimized for a multi-task loss function, similar to fast R-CNN.

The multi-task loss function combines the losses of classification and bounding box regression:

where \(\mathcal{L}_\text{cls}\) is the log loss function over two classes, as we can easily translate a multi-class classification into a binary classification by predicting a sample being a target object versus not. \(L_1^\text{smooth}\) is the smooth L1 loss.

Mask R-CNN (He et al., 2017) extends Faster R-CNN to pixel-level image segmentation. The key point is to decouple the classification and the pixel-level mask prediction tasks. Based on the framework of Faster R-CNN, it added a third branch for predicting an object mask in parallel with the existing branches for classification and localization. The mask branch is a small fully-connected network applied to each RoI, predicting a segmentation mask in a pixel-to-pixel manner.

Because pixel-level segmentation requires much more fine-grained alignment than bounding boxes, mask R-CNN improves the RoI pooling layer (named “RoIAlign layer”) so that RoI can be better and more precisely mapped to the regions of the original image. 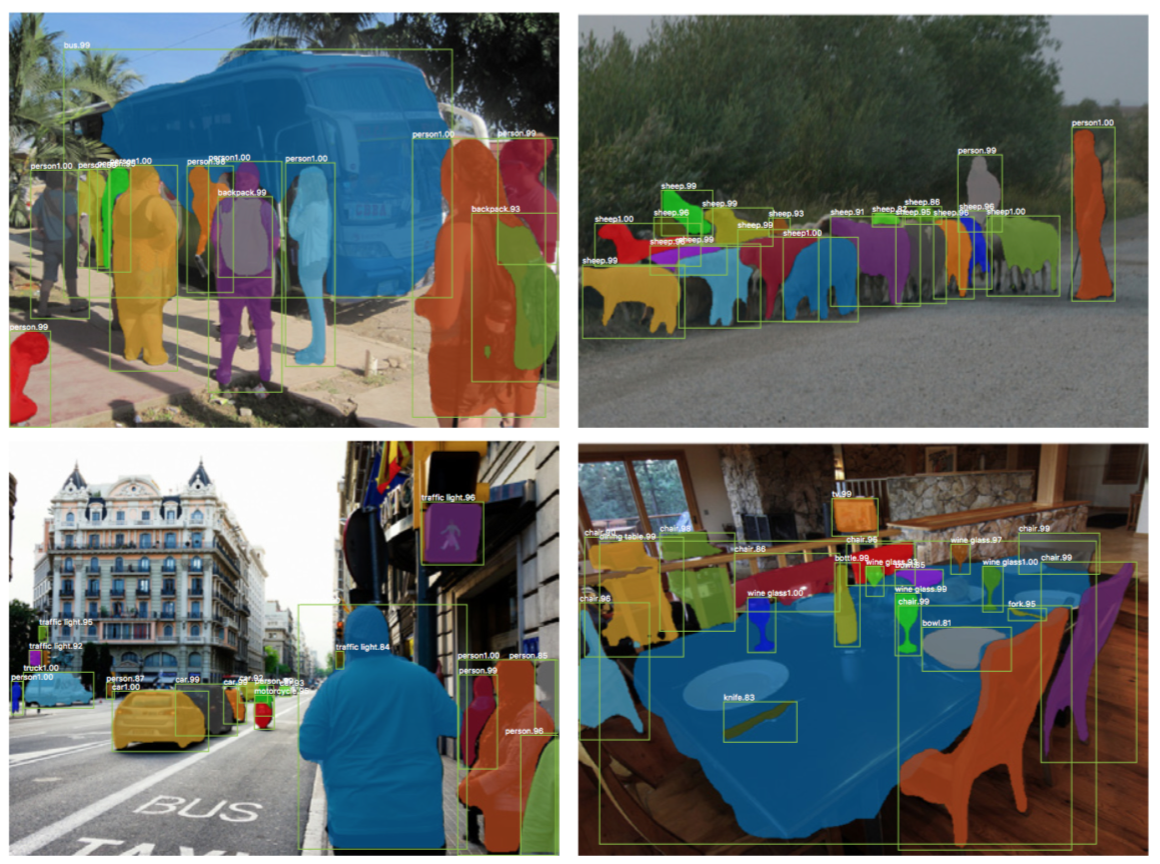 The RoIAlign layer is designed to fix the location misalignment caused by quantization in the RoI pooling. RoIAlign removes the hash quantization, for example, by using x/16 instead of [x/16], so that the extracted features can be properly aligned with the input pixels. Bilinear interpolation is used for computing the floating-point location values in the input. 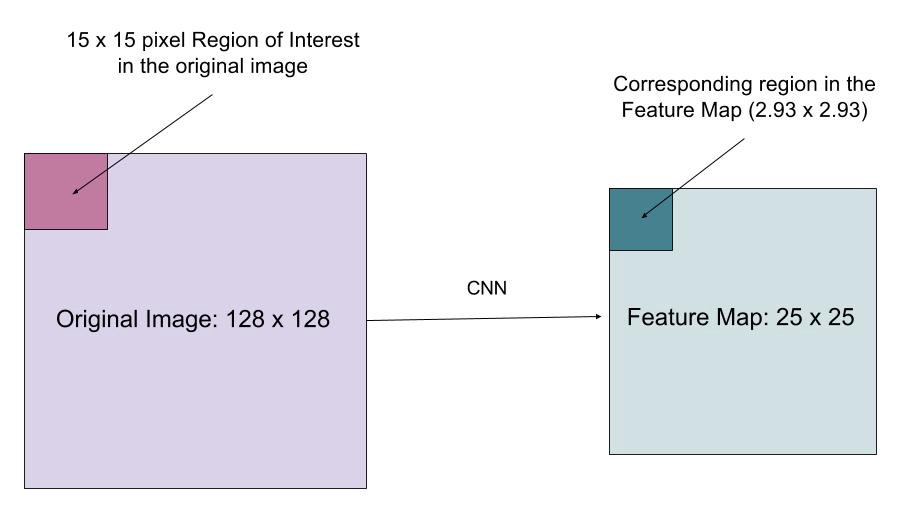 Fig. 10. A region of interest is mapped accurately from the original image onto the feature map without rounding up to integers. (Image source: link)

The mask branch generates a mask of dimension m x m for each RoI and each class; K classes in total. Thus, the total output is of size \(K \cdot m^2\). Because the model is trying to learn a mask for each class, there is no competition among classes for generating masks.

\(\mathcal{L}_\text{mask}\) is defined as the average binary cross-entropy loss, only including k-th mask if the region is associated with the ground truth class k.

Summary of Models in the R-CNN family

Here I illustrate model designs of R-CNN, Fast R-CNN, Faster R-CNN and Mask R-CNN. You can track how one model evolves to the next version by comparing the small differences.

[6] “A Brief History of CNNs in Image Segmentation: From R-CNN to Mask R-CNN” by Athelas.

← Object Detection for Dummies Part 2: CNN, DPM and Overfeat The Multi-Armed Bandit Problem and Its Solutions →